Orion's First Birthday was at Golden Gardens, a favorite beach along the Puget Sound in northwest Seattle. It was on an overcast Tuesday, July 19, 2011, his actual birthday. The video is 5+ minutes long.

We flew to Washington state on July 11th for a 3 1/2 week stay. We had his 1st birthday celebration at Golden Gardens on July 19th, his actual birthday. (Know what? My mom pulled out a Lightfoot family photo album and showed me a few photos of my first birthday, also at Golden Gardens!) Seattle's been having below-average temperatures and it showed it on his birthday. At least it didn't rain when were were there. Skyler, Tasia and friends had fun playing in the sand, moving logs, digging around, being buried. Family and friends came to meet Orion and share yummy cupcakes.

Now, the highlight of the day was the cupcake mauling and the sacrificial victim was a carrot cupcake generously topped with cream cheese icing. Mother Nature helped blow out the candle as soon as I lit it. Nice to see her so motivated. (I let Orion check out the candle a little bit before sticking it on the cupcake.) I couldn't help being proud and amused by the good job he did eating something new for the first time! (Or is it, "About time!") It's better to just see the video. 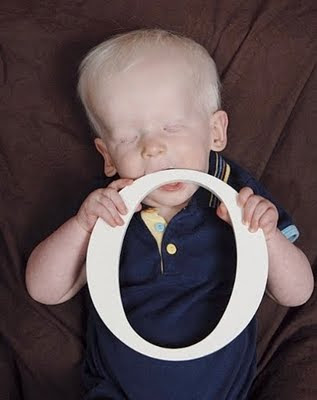 One of Orion's First Birthday photos. I loved how we can repurpose the letter "O" from "one" to "Orion".
Posted by Hex at 8:44 AM