When one says a child is blind, it doesn't mean the child is totally blind. It's a range of different vision issues. I have taken Orion to opthalmologists (I count 3) and the consensus is that he is totally blind (no usable vision).  I beg to differ, I think he reacts to light (not shapes or blobs, just strong light).  I've always brought up that I saw him react to camera flashes and sunlight.  That's all.  It ends up with what feels like me talking to myself.

Just being able to detect light is a huge difference than no vision at all.  There's the Non-24 Hour Sleep-Wake Syndrome that is common with people who are totally blind.  For a while I thought maybe Orion had this, but hey, he's still a baby and they usually wake up at night.  So far, so good for Orion. (Good for Mom and Dad, too.)

So, with the tip I remembered from a CBSS Summer Institute workshop Thomas and I took back in June, I recorded Orion's reaction, or lack of, to sunlight.  So, can you please look at this video and tell me what you think?

I'm bringing Orion to a pediatric/genetic opthalmologist at the National Eye Institute at the National Institute of Health (NEI/NIH) in Bethesda, MD in November.  Children like Orion is right up his alley.  I'm bringing this video, too. I am very curious about what he will say.
Posted by Hex at 10:27 PM 3 comments:

If you are new to this blog, I invite you to read an earlier post to learn about our decision to go ahead with the CI for Orion, "Cochlear Implant, It is".

Since Orion missed his first 2 CI (cochlear implant) activation appointments while in Children's National, I called Johns Hopkins on Monday (9/19) to see about adding 2 new appointments to 'work' with his already scheduled "3rd" CI appointment on 9/22.  He could come in for activation the next day, Tuesday the 20th.  So, there we go.

The external part of Orion's CI is white.  I'd like to say Apple white.  I oughta find a mini Apple sticker and put it on the magnet or processor.  Know where I can find one?

Orion was sleeping all the way from home, through them hanging the processor on his ear and the magnet sticking to his head.  They turned whatever it was, on, and Orion opened his eyes and turned his head then in a bit he started crying.  I understand the electrodes were being turned on one by one (there's many on the internal part, how many, I don't remember), and the audiologist was finding the levels he was comfortable with.  Unfortunately that includes going up to where it makes Orion cry, face turning red, then turn it down. Over and over again.

We went home with the CI on and a huge case of CI parts and accessories. Some of you might remember when your kid got a new hearing aid, there's this cute little lunchbox sized case...well, this is no lunchbox, it's more toward the size of an airplane carry-on.

The second part of the activation was on Thursday (9/22), he cried only once and was comfortable through the rest.  We met a lady, who will work with Orion on auditory 'habilitation.  She joined in for this appointment and told me Orion was doing much better... she'd heard him two offices over on Tuesday.  Yup, that makes sense.  Orion usually lets the whole lab and internal medicine waiting areas know he's getting his blood drawn, too.

Deafblind and in a Hospital?

Now with this recent experience with Orion at Children's National you know I was frustrated.

Imagine what it'd be like for a Deafblind child or adult on their own in a hospital.  They'd need even more communication access than I can imagine I'd need as a Deaf person.

Throw out the Video Remote Interpreter; get me a live, 24/7 deafblind tactile interpreter!
Posted by Hex at 4:10 AM No comments:

The Fall before Fall 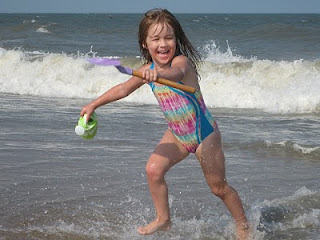 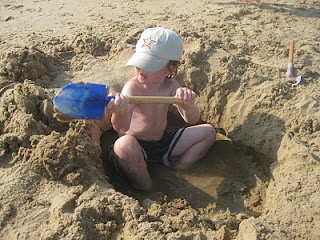 We had a pleasant Labor Day Weekend, our family went to Rehoboth Beach on Sunday where we met friends big and small to play. It was all of our kids' first time 'touching' the Atlantic Ocean. Skyler and Tasia have been along the shores of the Pacific in Taiwan and all three kids have frequented the Puget Sound in Washington state. Many firsts continued when Orion checked out Swedish pancakes and strawberries on Monday and we visited a fellow little friend in the afternoon. Such a nice weekend before the trying time for my family.

On Tuesday morning (9/6), Orion fell off our bed, 3 feet onto the hardwood floor. An eyeshadow bruise developed over his left eye and a straight line coming from it back over his left ear. (His CI was implanted on the right side.) The line disappeared soon enough. Orion's new movement skills, one is crawling a bit backwards with his forehead still on the surface, brings new risks.

I took Orion to urgent care in the evening after he vomited late in the afternoon. He had a CT done because the doctor was unable to look at or through his little eyes. Orion vomited again, big time, in the waiting room while waiting for the doctor to review the results. The doctor saw a mass.

Instead of returning to the exam room, we were directed to triage where they stuck Orion one time too many looking for a vein. They were clearly interested in more ideas when they let an EMT make a suggestion: stick a needle perpendicularly into the bone of his lower leg. This is where I can clearly see I cannot afford to have 100% faith in their decisions, simply because maybe they need to be more patient and they don't know Orion through and through. I said no, not that. Orion has possible osteopetrosis. No messing with his bones. It all ended with the doctor putting in the IV herself via Orion's foot. One nurse suggested I take Orion directly to Children's National next time he gets hurt. I will seriously consider that! He has to have an IV put in for his *whee*! ambulance ride. By taking him straight to Children's we can get him faster attention and maybe less needle sticking. We arrived at the hospital a little after midnight and finally was admitted around 4 a.m.-ish.

What I thought was going to be an 'overnight' observation turned into a longer stay. Ten days at Children's. It was boring, lots of waiting around in anticipation of results, no-feed orders before sedated procedures that started hours after it should have. It was frustrating for me as a Deaf person and that Thomas was unable to drive due to an expired license. (His license renewal came up right after the retina detachment in his good eye.)

Children's is a medically resourceful hospital. I totally appreciate the doctors, the many nurses, the delightfully colorful environment, the yummy chicken cheesteak from the cafeteria grill; but the overall access to communication for a Deaf person is not up to par. The best asset they had there were the VRIs (Video Remote Interpreters) that were resourceful for communicating with the doctors and nurses. It's basically a computer supplied with wi-fi and a webcam on it's own pedestal on wheels that can be moved from room to room or floor to floor. Unfortunately it took too long in between the operator receiving the language request to the time an ASL interpreter connected back to us on the VRI monitor. Two to six minutes... it's not fast enough. I can call Purple VRS (Video Relay Service) on our 3G iPad and get someone in less than 20-30 seconds. It's not immune to dropped calls and certainly makes me crazy!

I finally shed some tears of frustration on Wednesday, Day 8. A social worker came on Thursday and heard me out, of course, using the VRI. I made constructive suggestions, tossing in names of companies and Gallaudet University. The VRI is something Children's already have and I certainly could use it if I were allowed to dial in my own numbers to call home or a relay service instead of it stuck with a dedicated button straight to the VRI operator. I really do hope the hospital will follow through on it so that no one has to deal with technical difficulties when they should be focusing on their child. The social worker said it'd be done.
I learned a lot of tips during this stay, within the hospital and outside. I can ask the nurse to print out the reports for me to read and fully digest what was going on. There's a light gadget called a venoscope which is used upon or behind the hand, arm or slender body parts to help identify veins. Remember sticking a flashlight under your closed fingers and you could see your bones? A nurse used a venoscope on Orion and got a vein on the very first attempt.

Thomas and the kids were graciously given rides to the hospital, several different times, by a friend. If you're reading this, yes, that's you. We thank you!

One of Team Orion's members stopped by to pay a visit and bring me... gasp... clean clothes from Skyler's backpack at school.

Also memorable is the friend who brought me the caramel cream frappuccino, no whip. Thank you!

Orion missed 2 CI activation appointments on the 12th and 13th, Monday and Tuesday.

I drove home several times for a couple hours each time. I was able to go to Skyler's Back to School Night (Day 9) but I missed Tasia's Back to School Night (Day 8). I was pleased with the fact that the people at her school took it into their own hands to request an ASL interpreter without us asking them. Thomas and the kids were able to go. They rock! Yes, this is in Prince George's county... the hidden gem of Maryland. Er, well, I guess it's not a secret anymore after this.

Orion had 3 CTs, two were sedated CTs earlier during his stay that couldn't really tell the doctors what the mass was. He had a conventional angiogram on Day 7. A catheter was put in the femoral artery and a tube was fed up to his neck and they injected dye. They were able to identify what was going on in Orion's head that was eluding them for a week. It was a hematoma (bruise). Thank goodness! Not an aneurysm. So the problem was clearly identified and the last CT was on Day 10 and it was just to check the hematoma's size. Good news! The blood was reabsorbed. We could go home at last! We were discharged sometime past 11 p.m. and we got home just before midnight Friday night.


Orion's smiles were wide and preciously toothy. His widest yet. He KNOWS he is home. He was so sleepy and uninterested in the hospital. Now he's home and clearly happy. That makes us so very happy, too.
Posted by Hex at 9:55 PM 3 comments: