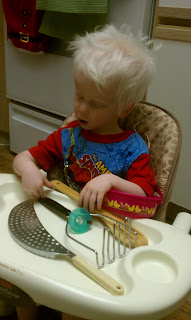 Joyeux Noel from the Withrows!


Wednesday, December 5, 2012- What an exciting morning at TSD for Orion!  Orion's ECI physical therapist met us at the PIP house to observe what Orion does all morning.  She gave great tips to get more out of Orion, such as encouraging him to cross his legs, making him sit up and not lean against his teacher when exploring his 'nature' scratch board (acorns, leaves, twigs, rocks), etc.  When we set him down on his bottom to eventually let him lay back, he worked to sit upright with both hands off his sides and on the floor.  We let him sit there, then when it seemed like he was stuck, his PT showed Orion how to get himself down, he resisted and continued to sit up!  Fast forward to us in the occupational therapy room, Orion showed us he could sit by himself once again, even at different heights (bench, 4-wheel scooter board, floor).

Some time ago and I can't recall who said it- Orion seems to be interested in sitting anywhere except for the floor.

Monday, December 10, 2012-  Orion's teacher informed me Orion signed "MORE" when I walked away from the dining table to get Orion's milk ready.  (Orion also has been sitting in this dining chair for 30 or more minutes without tiring out.  Record: 60 minutes!) Later after finishing his early lunch and washing his hands, Orion was laying down on the carpet when he seemed to want to get up (raised his arms), his teacher picked him up, he fussed, she put him down.  This happened a couple more times and he finally signed "MILK", perhaps a little frantically.  "MILK".  I ran over to the table where his unfinished bottle was and he quickly finished it off!

My thoughts- thanks to his PT suggesting Orion sit in our older kids' play schooldesk.  It was something we've had for a while and I didn't think to even use it as it seemed too big for him.  Nope, with another box on the floor in front of the desk for Orion's feet, he does great sitting in it!  (Has been sitting without any form of footrest all this time at home, school, here and Maryland.)  We now use the desk for snack time, home visits, exploring objects including braille books.

The PT and Orion's teacher have improvised a footrest for Orion's dining chair at the PIP house, too.

In this desk and dining chair (of opportunity!) with his feet supported he has sat forward, rested back and held himself upright independently.

He's been moving along inch by inch, but joyous inches, they are!