Cochlear Implant, It Is

The CI Surgery
The morning of August 9, 2011, I was able to carry our alert Orion into the operating room where he fought the funny gas. I wish there were a better way. I hope he doesn't remember fighting it. Orion's surgery was only an hour long. The surgeon informed me that he was able to fit everything in completely. Even though I got into recovery room to see him shortly after completion around 9:40 a.m., we were discharged much later, nearly 2:30 p.m. His oxygen levels were playing games once again, going over and under 90 but he still had nice breaths and great skin color. Thomas had to stay home with Skyler and Tasia since we couldn't think of anyone who was available on a workday to watch our kids.

All week, Orion had swelling on the right side of his head and a fever in the 101's. On Friday, the temperature finally dropped to the 100's and then 99's, 98's on Saturday (Aug 13th). He has been taking antibiotics as well as Tylenol with codeine mixed in as prescribed.

Tonight (Saturday), Orion's finally had a completely Orion night after a sore, sleepy week. Wiggling around and using his legs to push and hold himself in semi-head/arm stands in his crib. Finally.

We'll see what happens at his cochlear implant's (CI) first activation on September 12th. This activation will happen over 2 days, September 12 and 13. Friends have reported activation was a "weird kind of painful" experience so I'm glad this one will be gradual.

The Cochlear Implant Decision
Going ahead with the CI didn't come easily for us.

One major concern was osteopetrosis. (It's not to be confused with osteoporosis.) Osteopetrosis is the unusual hardening or thickening of the bones to the point where there is little or no calcium reabsorption. Meaning if a bone breaks, it'll take forever to heal or never. Orion went to a skeletal dysplasia clinic at Children's Hospital (DC) sometime during the spring, where it hasn't been confirmed or ruled out that he has osteopetrosis. It was brought to our attention when Orion was hospitalized at Children's for a week back in Jan/Feb 2011 with a respiratory virus. They took a chest x-ray to check for pneumonia. They didn't find pneumonia but found dense bones that appeared so white on the x-ray that got the ball rolling on trying to get a diagnosis. After Orion was discharged, I googled "osteopetrosis". That was a bad idea. (The Internet is a wonderful place, and a horrible place.) If you do the same, you'll understand why. The first thing that came to mind what a cruel irony it is for a deafblind person, who is likely to have more falls than a sighted person, to have this condition.

The good thing is that the geneticist felt if Orion had osteopetrosis, it was a milder form. It can be managed with medication. The more serious form requires a marrow transplant. Orion has had x-rays done again and what's left is the DNA results to come back. It would be even better to confirm it is only part of the Withrow hardheadedness!

What's also interesting is that osteopetrosis can cause deafness and blindness due to it compressing and cutting off nerves. Orion is already deafblind due to some other reason. Since Orion did have responses to loud sounds wearing hearing aids, we were able to conclude that his auditory nerve wasn't 'cut off'.

When Thomas and I first discussed the possibility of CIs for Orion, one of us was for it and the other wasn't; as time grew nearer, we actually switched sides! In the end, we both agreed to go ahead.

The other major concern was language and risk. We looked all over for information through the Internet: websites, powerpoint presentations, and articles as well as dialogue and discussions with friends, educators and service providers. (You can visit "Orion: March 2011 Update" where I mention 2 sources late in the blog post.) It is agreed among people who work with Deafblind children that there is not enough information and research on the experience and benefits of cochlear implants for Deafblind children. Thomas and I needed more information, we didn't want to have to try and see how the CI works for our son (guinea pig). There were several perspectives we appreciated that helped us go ahead. Statistics from two or three sources showed that congenitally deafblind children's communication improved (and that does not include speaking, which they didn't anyway). CIs can increase environmental awareness (and I expect it to also pique Orion's curiosity) and safety. Orion's world is only as big as he can touch it. With a little more information from his environment, his world should increase in size to as far as he can listen. If it turns out he can hear with the CI, it is guaranteed that he's going to be annoyed like the rest of us who can hear our dogs barking at squirrels, birds and leaves. Another associated area of concern is keeping the auditory habilitation meaningful, considerate and fun for Orion as a Deafblind child.

It might interest you to read an online article about a study of only 5 deafblind children with CIs. Congenitally Deafblind Children and Cochear Impants: Effects on Communication, Oxford Journals, Journal of Deaf Studies and Deaf Education, http://jdsde.oxfordjournals.org/content/14/2/278.full.

I've mused about the functions of the ear and wished there were an "optical implant". (There are retinal implants that are in development for those who have lost vision via deterioration of their retina.) I realize that the current availability of cochlear implants is due to the seemingly primitive function of hearing in comparison to the function of seeing. Sound waves physically hit the interior of the ears but sight is silent and much more complex, mysterious, nearly magical in how it works.

Communication-wise, we are still using touch and object cues with Orion. We try to entice him to put his hands on ours so we could sign to him. (This is called tactile signing.) He does sometimes, most of the time these days he doesn't so we still use touch/object cues.

Everyone in our household uses ASL, including our hearing daughter. We hope with the CI, Orion's curiosity is encouraged at an earlier age about his surroundings than if we didn't go ahead with the CI. Curiosity and experience should stimulate his knowledge and vocabulary. Conveniently, tactile signing is already available in our home. All of this learning and communication is not going to happen quickly, though. (At a recent CBSS workshop in June 2011, Dr. Linda Mamer introduced to us that Deafblindness is an "information gathering disability." This hit Thomas and I as the best one-liner, in a nutshell sentence that describes what kind of disability Deafblindness is!) I expect this to take a long time. I'll take it one day at a time. Of course it's more enjoyable to share the process with others. No objections at all if Orion's progress comes along sooner. We'll post any progress here on my blog.

Reaching Out
We've found Orion reaching out with his arms when his big brother Skyler plays with him. Orion also reached out while in his highchair at a recent mealtime. When I put my hand in Orion's hand, Thomas saw him become excited. Simply adorable!

Now with all I have said... I wonder if one day our teen Orion will complain about my going on about him in this post and others. Orion, people are interested in you, our family's experience and we hope what we learn and share here will help and/or enlighten readers, connect with individuals who are Deafblind and/or have other "disabilities" and their educators and more, during our quest to enable you to reach your full potential. 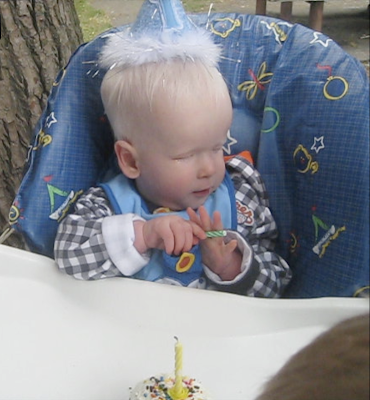 Orion checks out an extra candle while the birthday candle awaits lighting.
Posted by Hex at 10:28 PM