I first realized the overuse of Mom while reading a blogpost at "What I Would Tell You", by Julie Keon, http://www.whatiwouldtellyou.com/weblog/mom-isnt-the-word/.  This is a heart-touching blog.  There's reminiscing I can relate to as well as  things and perspectives to reflect on.

I wouldn't know how annoying being called Mom is in the hospital setting.  I'd like to really understand whatever it is they're saying. I'd love to be annoyed by repetitive "Mom"s because it'd mean I understand what the doctor or nurse says the first time around, even if the conversation is not with me. Mom said, Mom claims, Mom denies, Mom reports, etc...  I've read those in reports.

It's precious when your child calls you, "Mom", yes, but not every minute or two! Especially after you just got your train of thought back on the tracks.  Aaaah!

When I had to bring Tasia to the E.R. at Children's in September for a concerning abscess in her leg, the first sign of overusing "Mom" came up.  Tasia matter of fact-ly told a doctor that my name was Heather.  The doctor chuckled, acknowledged Tasia and called me Heather.  I can imagine how weird it is for Tasia to have doctors call me Mom when they are clearly not one of her siblings!

Tasia was admitted and discharged more than 24 hours later.  It was a different experience while staying with Tasia from my experience with Orion.  I never knew doctors could be entertaining!  Next time, I'll tell them to look for money in MY ears then skip off to the vending machines.
Posted by Hex at 1:52 PM No comments:

Happy Thanksgiving!   Recently, I was describing my wish to protect people's privacy with our blog.  Friends, teachers and service providers have remained nameless out of respect for their privacy. (Feel free  to let me know you don't mind me recognizing you by name.) Organizations, programs, fellow bloggers and presenters' names, yes, I share because I want you to know how many wonderful programs and contacts there are out there that you can seek if you need support and guidance.  I never forgot thinking during my pregnancy with Orion and his early months on the outside that there wasn't enough information out there.  I'm glad I learned the opposite is true, there's so many people and resources out here!   I want to make it clear that we have boundless thanks for Orion's extended family, teachers, service providers, consultants, friends, little friends and their moms and dads for being a part of Orion's life whether it is little or profound, directly or indirectly, cross-country or right here with us. Each one of you count.  Every one of you are a twinkle in Orion's sky. Thank You!   Hugs, The Withrow Family
Posted by Hex at 10:43 AM No comments:

One early morning (late September or early October) at 6 a.m. Orion was still awake!  So, I figured he's hungry.  I set him in his highchair and put the tray on.  Then it happened.  He leaned forward and brought his head down and attempted to lick the tray and brought his head back up. OK! You're hungry!!

Skyler's 7th birthday party was at an indoor splash park.  This was fun for all kids there and it was especially fun to watch Orion happily flap his arms wildly as his uncle held him in the water.  The water wasn't 'bathtime warm', it was definitely cooler.  He probably could've generated electricity to power a small village with his excited movements.  A big plus was that Orion's paternal grandpa (Dan), maternal grandma (Elaine) and uncle (Dale) could join us for Skyler's birthday. 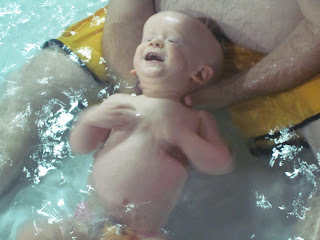 Orion will have home visits from his D/HH teacher every week, as decided during his annual review (IFSP) with PG County Infants and Toddlers program.

10/27/2011: Orion's first auditory habilitation session at Johns Hopkins.  Our dear DB technical support person from CBSS was present.  I thought it went well, based on Orion's happiness and willingly using his hands to touch. He will go weekly on Thursday afternoons.


I accompanied Orion, with his skeleton pajamas/costume, for his school picture sitting at Kendall School  What's one way to make Orion smile for the camera?  It helped I had wonderful assistants. :)  One teacher fanned Orion with a whiteboard causing him to smile for the camera.  One fellow mom was behind photographer to 'will' her take pictures at the right times. I am looking forward to when I get the prints.  The group then went trick-or-treating at the front offices.  Orion slept through it.  I swear I gave him his treats... most of it anyway.

At the end of class, I was able to set him up so I could paint his feet and hands to print onto paper. He explored a paint-soaked paintbrush.  He really checked out the drippy brush, squished it, moved it around. He really felt it.  I felt privileged to witness his discovery.

Tasia successfully hops over a swing of the jump rope for the first time.

Orion's Touch
He has been seen putting his foot on people's throats and chests.  He has explored a few people's faces pretty well.  Last week, Orion had his hands IN Thomas' mouth for a good minute, feeling around inside and out.  It was awesome to watch, I encouraged Thomas to stay 'available'.  So funny.  This morning in Kendall's PIP room, Orion checked out my face really good, including my nose (I lightly squeezed his nose, too, in response).  Then moments later he did the same thing to his teacher.  With Orion, I have to say, "Wear glasses at your own risk!"

Orion's CI
He's hearing things.  He seems to like it when he hears sing-songy voices. He has been startled by drums.  When you clap your hands his eyes will blink.  Members of "Team Orion" are just starting to observe and collect information to get a better picture of what his hearing is like with his CI.  One big challenge is keeping his processor/magnet coil on his head.  I would say it's on him as much as 3-4 hours a day when we'd like it to be on so much more.  It'd mean more experience with sound.  I have to admit it is odd seeing this coming from me but I'm happy we're trying 'everything' with Orion.  Auditory information just comes to you, whether you like it or not.  You can lounge around and sound happens and you'd know it. (Hearing and sight is a distance sense.) While touch cues/tactile signs require effort, whether it is hard or so easy. It's an up close information transmittal.

He Doesn't See, He Still Does
Orion has crossed his legs at the knee while in the stroller.  I thought this was so cute... he's 15 months old and has never seen anyone cross their legs before.  So, as he's doing things, I think about whether it's something he learned or something that just happened, unplanned or from within. I feel the same way about his precious smiles.

Orion's Physical Progress
His head control is so much stronger when he's upright. When I pick him up just like I would any baby his age, he'd hold his head up, hold/hug my shoulders for a minute then put his head down on my shoulder.  We're still working on him to sit up on his bottom with support from his hands/arm on the ground.  He can control the forward/backward movement of his trunk but if we let go he'd go down on either side (left or right).  He protests by pushing himself back into the person supporting him and tries to slide down until he's flat on the ground.  While he's fighting it, he's actually making himself stronger.  It's still progress! (In the picture below, you can see him keeping his head up while his uncle is making me nervous! Why? He is 'not supposed to be able' to stand but he was anyway, briefly.) 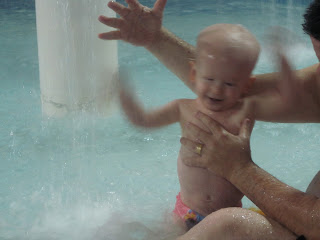 Orion's song
Tasia and I had fun with the Bingo song modified to Orion's song.