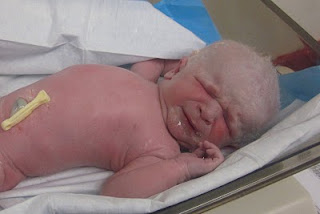 Our third child, born and named Orion Theodore, is around 5 minutes old in his first picture.

We were relieved to meet him at last. We were floored with how beautiful he was and that his hair was delightfully white!


An e-mail I sent to my grandma, Dorothea Nordstrand, back in July 2010 shares how we picked out our newest son's name.

I wanted to send you a note to let you know how we decided on Orion's name. We picked Orion because it's a fun constellation to find in the SKY and his big brother is Skyler. So both of our boys' names are in reference to the sky. As for Theodore, there are two major reasons: we wanted his middle name to start with a "T" to go along with Skyler Thomas and Anastasia Thora. My poor mom had a heck of a time following me yesterday in a puzzle activity I did with the name 'Theodore', so I'll spare you. Put the last two syllables in the name in front of the first two syllables and ask yourself what it sounds like. Instead of TheoDore, you should see DoreTheo. (Yeah, cross out the last 'o', though so it comes out DoreThe.) A flip-around of your name, Grandma Dorothea! Mom was so funny- saying something like it's a girl's name and yeah, I got a little creative knowing we're having a boy.

(I realized later I counted the syllables wrong, but we all get the point, right?)

Then my Uncle John whips out yet another phun pun that I have two "suns". He never fails to amuse!

Our daughter's name is also inspired by yet another awesome grandmother of mine, Anastasia Lightfoot. Grandma Anne, as we grandkids called her, was talented with drawing cartoons and sure loved to laugh and joke. She and I used to have cartooning contests to see who could come up with the most ridiculous characters. Interestingly enough, my little Anastasia has an apparent addiction to drawing, too.
Posted by Hex at 9:13 PM