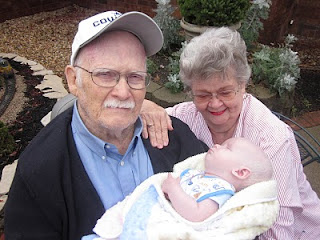 ay forever written down in Withrow family history. Not because of Orion's new shell but because Thomas' dad, Thomas E. Withrow, Sr., passed away peacefully in his sleep during the morning of the 20th in Columbus, Ohio. His 82nd birthday was on December 15th. We will miss him and we are happy we saw him during Thanksgiving (and that he saw the whole family, Thomas and Dale's) and that he went the way he was hoping to go. Thomas' mom, Elaine, has flown in to Maryland to be with the rest of the family at this time. We will have a memorial service here in Maryland sometime next week.

Orion went to the ocularist in Bethesda midday of the 20th to get his new shells. It took around 30 seconds to get it in. The ocularist slipped the top of the polished plastic shell underneath Orion's top lid, and that's when he squeezed his eyelids shut but that didn't stop the ocularist from pulling down the bottom eyelid and the bottom of the shell went right in. Orion was MAD, then he complained and fussed while I massaged his legs, etc. In 20 minutes he was completely settled down as if the shell wasn't even there, and that remains the same 2 days later. We only put in one shell on the left eye, the right shell will go in on January 7th depending on how Orion does with the left. The shell is like a huge contact lens, curved deeply on the inside so it doesn't touch his cornea but only around it. There was a black dot painted in the middle of it, kind of like everyone else's pupil, I can see that the shell has not slipped out of place. I could see the difference right away as his top eyelid wasn't turned in anymore, and Orion has been opening his lid gently by himself. The ocularist waved a light in front of Orion's left eye, with the shell in, and he flinched. It's definite Orion sees light through that eye. He said if Orion can see light he'd open his eyelids to find it, than try to look through closed eyelids. Interesting. 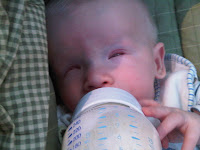 Working on a bottle. The shell is reflecting light and shadow, making it look like he has an iris in this pic. 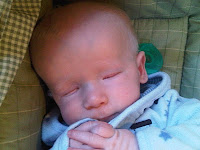 His left eye looks more full with the shell in. Can you tell?
Posted by Hex at 8:59 PM