Here's another DeafBlind rabbit hole journey I'd like to share. (Or after reading this post, you might think that an elaborate rabbit warren would be a better analogy?)
A lifetime ago, I studied for a B.A. in Graphic Design at Gallaudet University. It is still beneficial to me these days and I was pleasantly amused when it came to musing on the topic of tactile perception, information and resolution. A couple papers I have read (see references) and people’s thoughts have also converged in an exciting way for me. Such as:
In this first post of a few, I’ll focus on a comparably small pearl of a takeaway from Jude Nicholas’ paper.

During one of my DeafBlind-focused graduate courses at Texas Tech, I came across a paper that was fascinating, overwhelming and worth re-reading several times: From active touch to tactile communication--- what’s tactile cognition got to do with it? by Jude Nicholas (2010). Nicholas (2010) wrote that the density of nerve endings in a specific area brings in more information than a large area of skin area perceiving tactile information. His paper included an illustration of a brain and a visual representation of body parts lined up just off the the brain's surface (Nicholas, 2010, p. 9). The body parts are visually exaggerated, not exactly in order and not in size proportion because they are decreased or increased in size according to its number of nerve endings. For example the hands and face are larger compared to the elbow, shoulders, and the rest of the lower body through to the toes. This is a visual representation that our face, eyes, lips, hands, fingers have a higher nerve density than the rest of our body.

Exploding into my mind was the analogy of resolution in visual print media that we know as pixels per inch (p.p.i.) being similar to the number of nerve endings for the amount of information perceived via touch. Perhaps another way of saying it is nerves per inch, “n.p.i.”? The higher density of nerve endings is similar to higher p.p.i. images. Images as you see it (without zooming in) on your computer monitor are shown in 72 p.p.i. resolution (low p.p.i.-> smaller file size-> easier web page loading... at least for in 1997 with dial-up Internet services!); photo prints are usually 300 p.p.i. You can go higher to 600 p.p.i. but 300 p.p.i. is already great. If you zoom in on an image locked at 72 p.p.i. on your computer, you will see jagged or blurry edges that are not well defined like higher p.p.i. images). (The numbers of pixels is controlled in how you plan to take photos, scan and create digital art that are eventually printed out.) This higher resolution via density of pixels in a single printed square inch brings us to the topic of nerve density throughout our bodies. 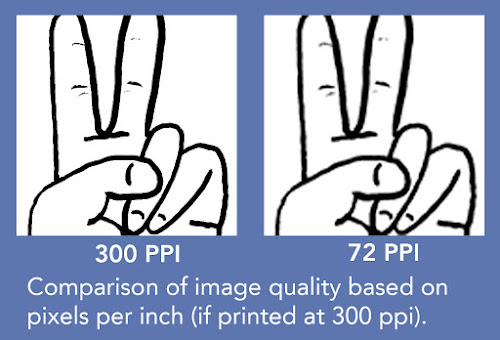 [Image: Comparison of image quality based on pixels per inch (if printed at 300 ppi).
Image created by Heather Withrow.]
Nicholas (2010) points out that many things we do still require tactile input anyway. Basically if an area on your skin area has a lower number nerve endings, akin to 72 pixels per inch, like the outside of your upper arm or all your toes, it still contributes to perception. It is using whatever is available and perceiving, thus helping information reach your brain for processing. 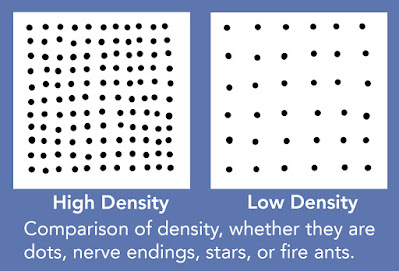 [Image: Comparison of high density and low density in dots.
Image created by Heather Withrow.]
Pixels per inch or density is just one of the working components of the brain show biz. In order for the brain to benefit from information coming through these nerve endings, the brain needs to be interested and paying attention to what may come (Nelson & van Dijk, n.d.). The hands, lips, whatever it is that is being used by a person to perceive, needs to be actively touching and interacting with the object at their own pace (Nicholas, 2010). This is another shout-out for giving DeafBlind people— babies, children and adults alike— time to explore… to think about what they’re feeling, the incoming information interacting with available pre-existing information in the brain and deciding on what to do next. Is it safe? Gross? Delightful? Toss it? What is being asked of me? Explore more? Speed-dice it and sauté it?
Since our back, outer thigh, arms, to name a few, do not actively interact like our dexterous feet and hands, they need to be freely and actively attending (the brain feeling via skin) to the tactile input in order for the mind to process what is going on. This is a nod toward people using ProTactile, how they use more of the receiver's body beyond tactile-signing only via hands.
A functional example of paying attention is that you’d definitely feel the prick of a vaccine being delivered as you’re awake and dreading it. An example of not attending would be a when small snake drops onto you from a tree branch above as you’re in deep sleep during a camping trip, I would guess that you’d not shriek. You might continue to sleep or be startled awake but still unaware of the nope-rope's fall. Perhaps confused. Another example would be that you receive a generous swirl of cool whip sprayed onto your limp open hand as you sleep but only waking up a little to use the aforementioned hand to respond to a man-made itch on your nose.
Note: These pranks may or may not have actually happened.

Nelson, C. & van Dijk, J. (n.d.) Child-guided strategies for assessing children who are deafblind or have multiple disabilities. Netherlands: ivdmtw Noot Muis. AapNootMuis Productions.
Nicholas, J. (2010). From active touch to tactile communication--- what’s tactile cognition got to do with it? The Danish Resource Centre on Congenital Deafblindness.
Posted by Hex at 7:26 PM