The Second Opinion: The Ocularist 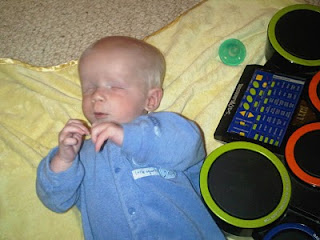 Today, 4-month old Orion and I met Orion's new ocularist in Bethesda. It was a huge relief to meet him and get confirmation on my mommy instinct: Orion will benefit immediately from shells inserted in his eye orbits (a.k.a. eye sockets). Over the phone last week he stated that babies can have the shells put in at even weeks old. During today's visit, he observed that Orion's upper eyelids were turning in, the lower eyelids were overlapping the upper eyelids. I noticed that but I realized I was not alert to what was happening. The clear shells will encourage Orion's sockets to grow in proportion as the rest of his face grows. The first year of life is the year babies grow at an amazing rate. In fact, Orion has grown 5 inches in his first 4 months of life! I cannot help but wonder what the other professional, a plastics ophthalmologist, was doing telling us that implants will be painful to Orion and that we do nothing but follow up with him in 6 months. He said nothing about shells either. Although I appreciate him telling us he cared about Orion as if he were his own... unfortunately something was missing from the whole picture. I can't imagine missing 6 more whole months of opportunities to work with Orion's eyes! With the ocularist, everything seemed to be on the right track- he was pleasant, humorous and took the time to type on the computer screen whatever he was saying.

The ocularist opened Orion's eyelids and looked inside while Orion objected to having his sleep interrupted. Serves Orion right to do the same to Mommy during Mommy's sleep time! ;) Clear shells will be made for him and his office will call us when it is ready so we can come in and have Orion try them out. I am looking forward to it!
[2nd Edit: Check out this mom's photo blog of her son's trip to the ocularist. In it, you'll see photos of the shell I'm talking about. It goes around the front of his little eyeballs, unlike the traditional 'glass eyes' many of us know about and those only go in if there are no eyeballs present. By the way, I love and echo what she calls her 'New Normal'. :::H]
Top: Orion enjoys the electronic drum pads thumping out its own rhythm.
Bottom photos: Big brother Skyler's first pair of glasses! White-haired Withrows share a moment. 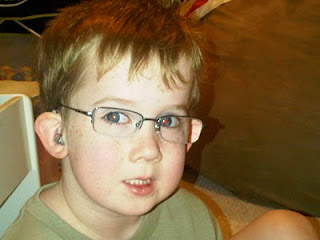 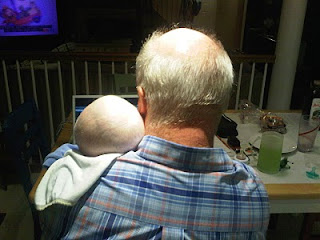